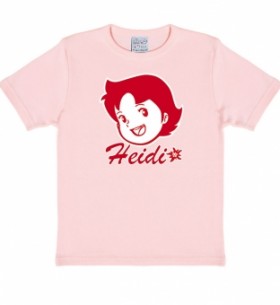 Looking outside at the rain and putting an extra layer on whilst I do so, you would be mistaken thinking it was autumn.  It’s officially British Summer Time and we’re just waiting for it to kick in.

We’re quietly confident here at FKHQ that the sun is just around the corner and when it does finally put in an appearance, we’ll be here with lots of summer goodies. Kicking off with some fab tshirts from the Netherlands.  Logoshirt makes licensed tees for men, women and children with characters such as The Hulk, Captain America, Assorted Marvel Comic peeps, Che, Star Wars, Batman et al. There’s definitely something for everyone. We have some very cute Heidi tees for children along with the revolutionary himself, Che Guevara (which also comes in ladies sizes).

The tees and sleeveless dress made from Summer, Sweet Days and Bambi fabric are almost ready to go onto the website.  Keep your eyes peeled as I know these won’t last long. The Scandinavian fabric have been exquisite so far this season.

Gnomeville and Dala horse from Michael Miller have also been restocked and I’ve got some made up into A-line pinafores waiting to be photographed.  Again, these will be available early next week.

As a an official Mancunian I suppose I should be doing a tribute to Manchester United and in particular, Sir Alex Ferguson. Wracking brain for what but I do have some lovely red jersey that I can conjure into something. It’ll definitely be a TA-DA! moment when it’s done (whatever ‘it’ is). Suggestions gratefully received!

And finally, to all your mothers, moms, mums, mams etc. I wish you all a happy mother’s day (not in the UK though as we had our mother’s day some 2 months ago). Hope you’re being spoilt rotten.