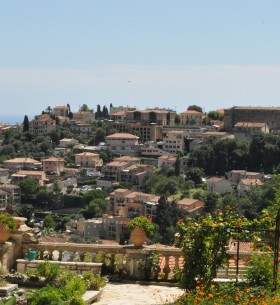 So we are back from the South of France, orders are now going out as normal.

The picture is the view from behind the Chapelle du Rosaire de Vence.

The Chapelle du Rosaire de Vence (Chapel of the Rosary), often referred to as the Matisse Chapel or the Vence Chapel, is a small chapel built for Dominican sisters in the town of Vence on the French Riviera. It was built and decorated between 1949 and 1951 under a plan devised by Henri Matisse. It houses a number of Matisse originals and was regarded by Matisse himself as his “masterpiece”. While the simple white exterior has drawn mixed reviews from casual observers, many regard it as one of the great religious structures of the 20th century.

Not sure it was worth the 6 euros entry for adults and 3 for kids.

We Are Having Twins….

…NO! Not me!  But I just adore this youtube video.

I’m not sure if the older sister is laughing or crying or both, but if it doesn’t make you smile then you must surely have a heart of stone. The mum had been trying for a baby for over two years and was blessed with twins for her valiant effort.