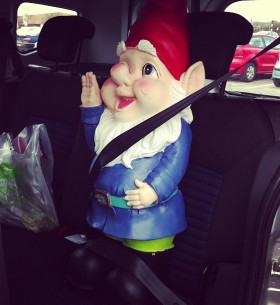 We Love Gnomes – We Really Do

As most people know, I am a huge fan of gnomes.  We have several in the garden and a huge one in the shop (Graham).  They’re iconic, kitsch, happy, sinister and dare I say, ahem, sexy.

I’m utterly thrilled that Royal Horticultural Society lifted it’s ban on gnomes at the Chelsea Flower Show 2013.  The previous ban had been in place for a years and although I’m not really sure why they were excluded from the show, I’m sure they’ll provide a fun, colourful and quirky angle on what is usually seen as a straight laced affair.

Anyhoo, here’s a potted history of gnomes for your delectation.

Garden gnomes, believe it or not, are not the product of a 20th century lapse in good taste, as their garishly colored clothing and smiling countenances may indicate, but rather an 19th century one.

In the second half of the 1800s, German sculptor and potter Phillip Griebel started a business molding ceramic into lifelike busts of animals, a fashionable home and garden decoration at the time. Inspired by the gnome myths of his home, he began fashioning small, pointy-hatted ceramic gnomes for gardens; the first gnome went to market in Leipzig in 1884 and was an instant success.

Production was halted during World War II, and following the fall of the Nazis, garden gnomes were banned briefly as the German Democratic Republic rose to power in East Germany. Still, the gnomes managed to pull through and Griebel’s garden gnome dynasty exists even now, although in a much diminished capacity, owing to the cheap labour and even cheaper materials coming out of  China.

Nowadays, garden gnomes can be found in a wide variety of attitudes and poses: Reclining on one elbow, smoking a pipe; fishing with a wee fishing rod; standing proudly, hands on hips; pushing a wheelbarrow; or holding open his robes to reveal his naughty bits.

Do you have any nice pictures of gnomes for me to admire?  Please email me and I’ll feature them on the blog.